The Brown-headed Cowbird has become a menace to songbird populations all over North America. A small, stocky blackbird, the males have glossy black plumage and a rich brown head whereas the females are drab brown birds. What makes the Brown-headed Cowbird such a menace to songbirds is the lazy manner in which they raise their young.  Females will use all their energy over the breeding season to produce eggs, sometimes up to 50 a summer. They lay these eggs in the nests of unwary birds; usually at the cost of the smaller bird’s young. The young cowbirds usually hatch earlier than their foster parents chicks and therefore, get most of the food, which can ultimately lead to the death of the foster parent’s young. The Brown-headed Cowbird parasitizes more than 200 species of birds; the Chipping Sparrow being one of the most hard hit species.

In the above photo, there are 4 male cowbirds all looking up from my bird feeder at the arrival of a juvenile Grackle. 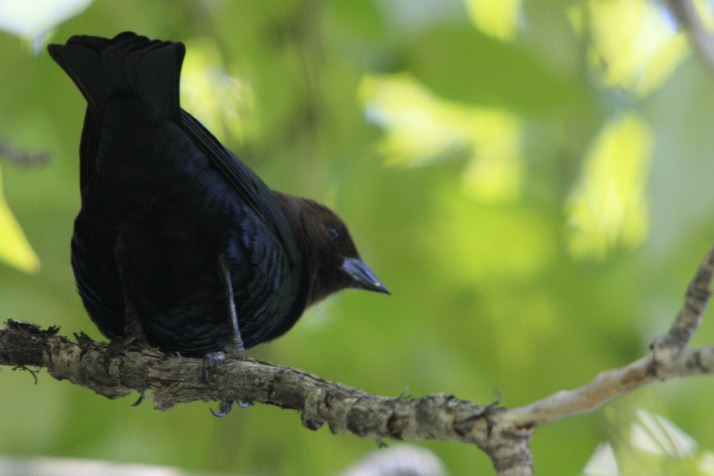 There is a history behind the cowbird’s parasitism. At one time, it followed the buffalo herds across the prairies, a nomad, and therefore could not raise its young, resorting to the help of unwitting songbirds. Following herds of buffalo, the Brown-headed cowbird’s range was limited to plains and prairies. Deforestation and forest fragmentation by humans, however, opened up the way for the cowbird and they started to parasitize more and more species. Due to deforestation, the cowbird has expanded significantly, both in range and in number and it now poses a threat to some species. 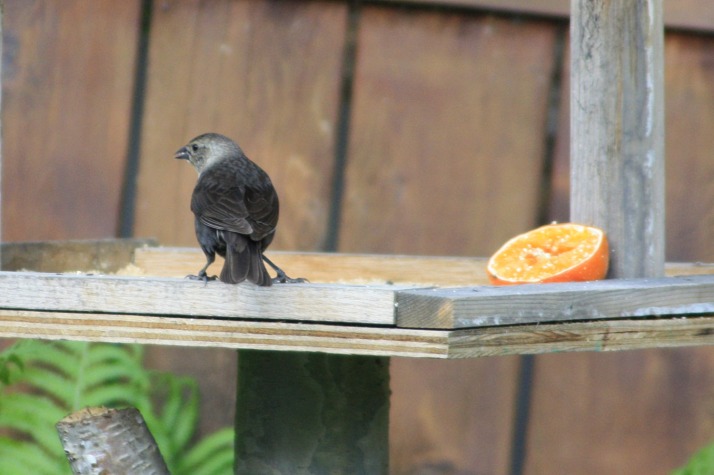 Several species, such as the Yellow Warbler, have developed defences against cowbird parasitism and recognize the cowbird egg. The female Yellow Warbler will make a roof over all the eggs, including her own, upon recognizing the cowbird egg. She will then lay her eggs again. Other birds will throw it out of the nest or abandon the nest all together.

This one species goes to show how much human actions can change the world around us.