A rush of wings, followed  instantly by  high-pitched trills break the silence. It is a cold, wintry scene, snow falling slowly from the never-ending sheet of clouds that blanket the sky in a gloomy grey. Standing still, nothing is to be heard; no cars, no people, and, above all, no birds. Just when it seems as though the entire world has gone into a peaceful slumber, the calm is broken by the sound of nature. 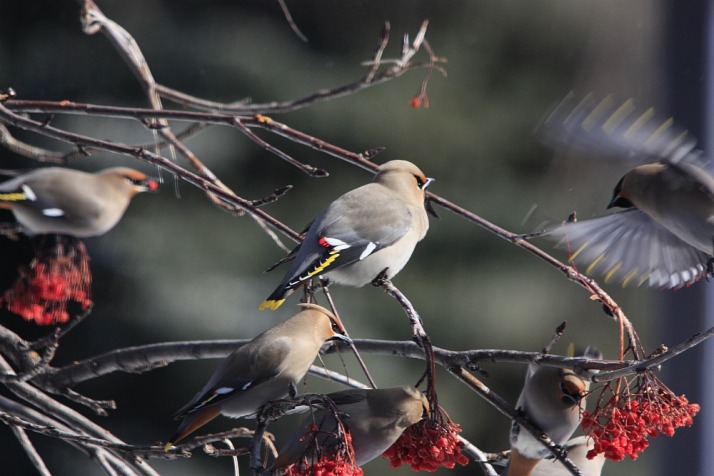 When they descend in hundreds, berries don’t last long at all. These birds are highly social and travel tight together, descending en masse on fruit bearing trees, where they proceed to rapidly consume thousands of berries. A very hardy bird, the Bohemian Waxwing toughs out the frigid winters of northern latitudes, enduring harsh conditions.The waxwing is both gregarious and elegant with a slick crest, and soft, silky plumage; it is deemed attractive by many. Named for the red, drop-shaped, waxlike tip on their feathers, this bird has warm grey-brown plumage, a black patch through the eye and a yellow-tipped tail. Bohemian Waxwings are berry aficionados and during winter, survive on the fruit of trees such as mountain ash and juniper, but also eat saskatoon and choke berries. Such a heavy reliance on one source of food can greatly affect a birds population and will cause much fluctuation. If there is a high population one year and a low fruit crop the same year, many waxwings will disperse in winter further south out of their regular mapped range. These years are known as irruptive years and are cherished by southern birders who do not usually get the opportunity to observe these birds.

I love witnessing large flocks of Bohemian Waxwings, it is possible to hear the whir of thousands of wings as they land, the twittering as they communicate endlessly, and the soft thud of berries as the fruit falls into the snow below, dropped by  a careless tug from the beak of a waxwing. Sometimes, after the flock has left, the snow will be littered with bright red berries. Then as cars and people pass over the fruit, the snow will be stained a rose color, evidence of the masses of birds that banqueted there. 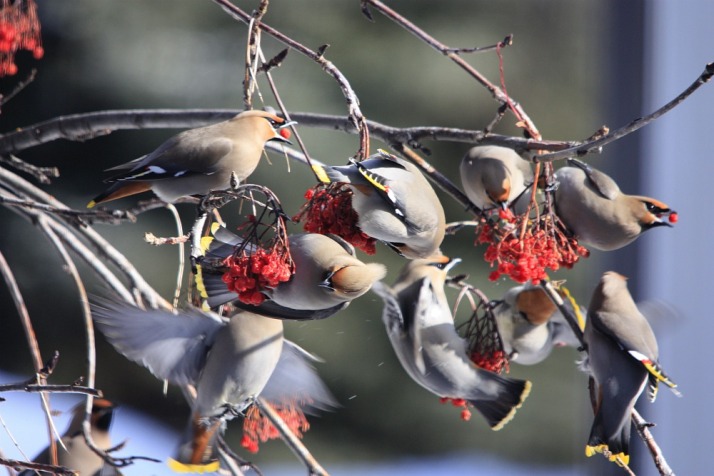 Remember next time you are shoveling snow in -30 degree weather; you are privileged in that you can witness this elegant species brightening up the dull grey day. These birds are truly northern and hardly extend into the U.S. They are definitely one of the things I will miss most about Calgary winters.