This year marks my first ever Christmas Bird Count. As the date approached and the weather forecast flip-flopped from cold and blustery to a warm winter chinook, I was confident that no matter the weather, I’d make the best of it and tough it out. Thankfully, we had a beautiful day. Almost no wind to speak of, and the birds were out in force.

The organizer, Philip Cram, had put me in one of the walking groups by request, with Rob Worona, David Pugh, and Bernie Diebolt, all familiar names to me, but my first time birding with Rob, the group leader, and David, a fellow photographer.

Starting at western-most parking lot at South Glenmore Park, we made our way across the valley wall and westward into the Weaselhead proper. It started out quiet, with the usual suspects making their appearances. The Common Redpoll, the Black-capped Chickadees, and the White-winged Cross-bills we’ve seen so much of lately.

As we headed further toward the bridge spanning the Elbow River, we were mobbed by a group of Black-capped Chickadees, and were alerted to the presence of a rarer Chickadee species, the Boreal Chickadee. As the Black-capped Chickadees flocked, the wheezy, higher pitched nasally tones of the boreal species edged closer and closer, until finally it made an appearance. Though not brave enough to hand-feed, it did come close, and finally dropped down to eat some of the black-oil sunflower seed on offer.

Continuing down the path we were greeted again by another new sight. Perched high up across one of the smaller tributaries to the Elbow River was this juvenile Northern Goshawk. The bright white eyebrow and the jagged tail-bars were distinct enough for Rob to confidently make the species ID.

Finally we reached the bridge, and in amongst the Common Redpolls earlier, we thought we may have seen a Hoary Redpoll or two in amongst the flock. We were granted a second, much closer view of one of them, and as we compared it to the others, we became more and more convinced. Another first for me, the Hoary Redpoll:

We stopped for lunch to compile our count numbers and to re-energize, but again were mobbed by hungry birds and a Red Squirrel or two, but as we were finishing up, a couple of very brave Red-breasted Nuthatches flew in for a bite. 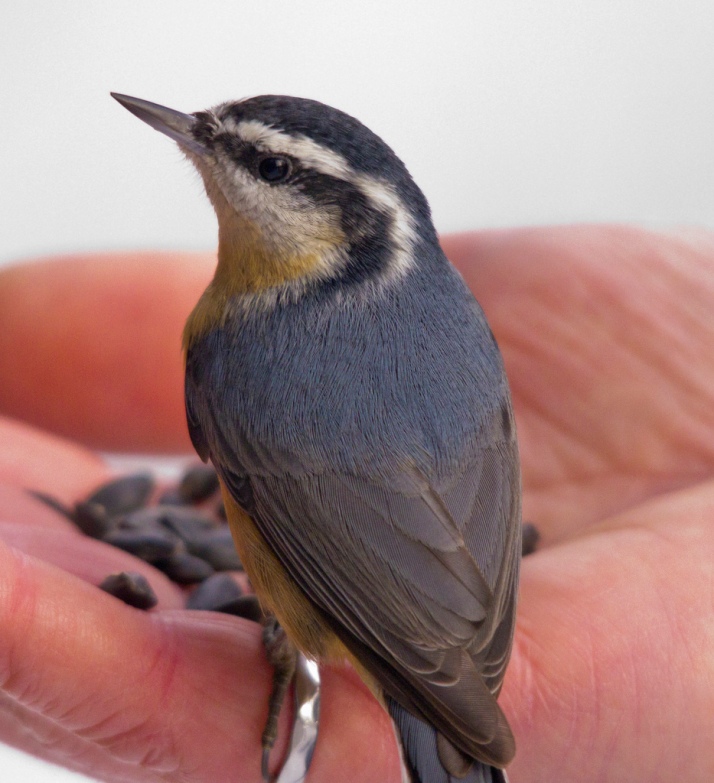 Though it was a fairly warm winter’s day, the sun hadn’t really made much of an appearance, but when it did, these Pine Grosbeaks began singing and for the first time, I heard a soft cooing from the females, almost like that of a Rock Pigeon or Eurasian Collared Dove. I was completely unaware that Pine Grosbeaks made sounds anything like this. 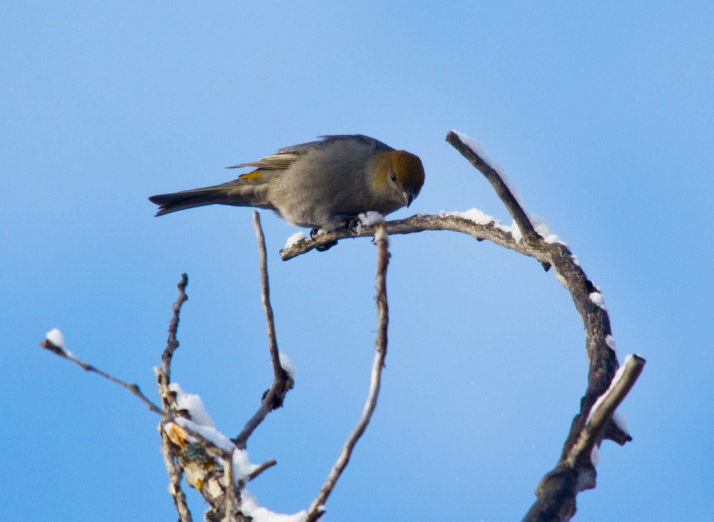 At this point, we stopped once again for a water, coffee, and snack break while this Common Raven vocalized above us with its unearthly and very unusual croaking call. I’m always amazed at the variety or Raven behaviour and vocal range. I’ll have to follow-up with a post on the variety and uniqueness of corvid behaviour among the birds. 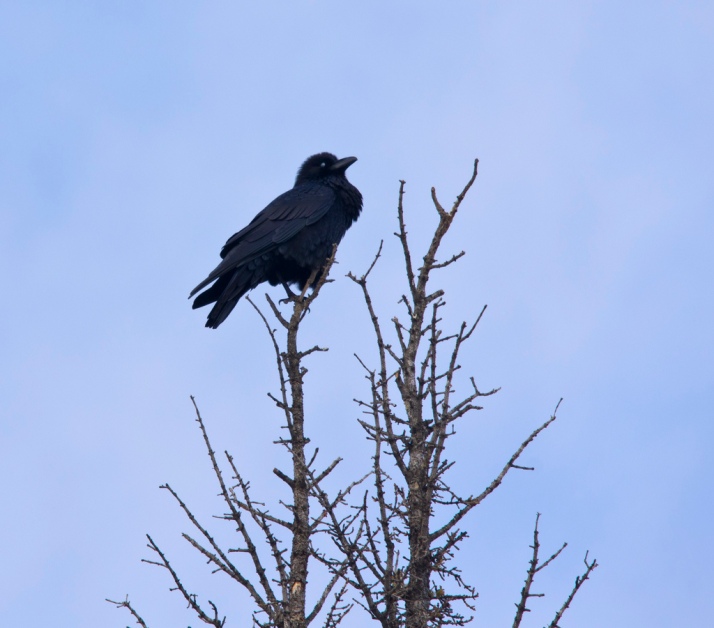 Around a bend and over another tributary channel of the Elbow River and we were back to the base of the southern valley wall. At the crossroads of the trail heading back to the top of the southern wall we stopped at a feeding station to where a number of species were found. The White-breasted Nuthatch, Hairy Woodpecker, and Downy Woodpecker: 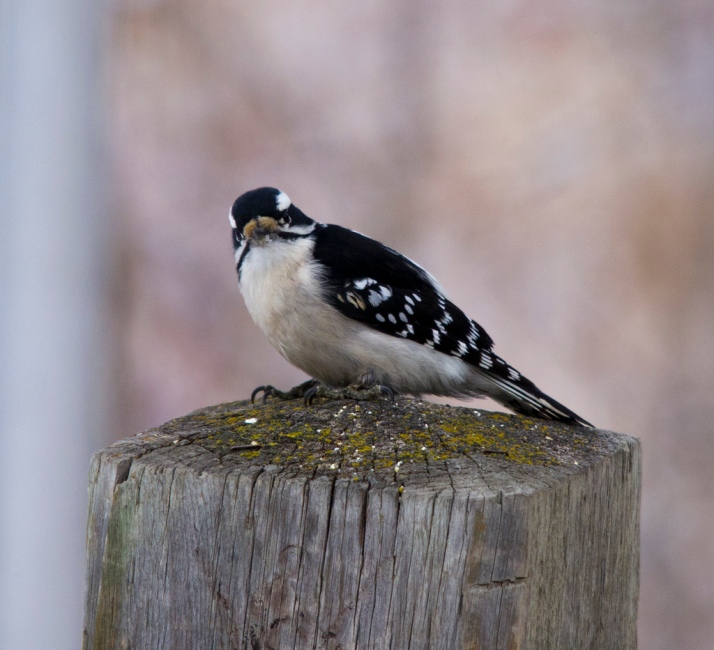 The last few hundred meters did turn out productive though, granting us a Ruffed Grouse, a few House Finches, a Pine Siskin, and a very good angle at some close Pine Grosbeaks atop the spruce trees bordering the path. 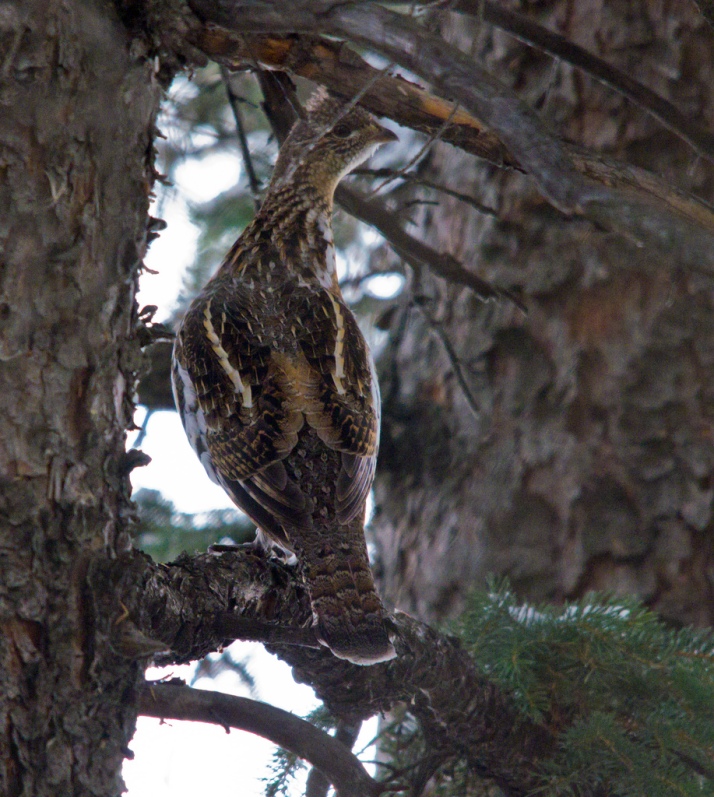 All in all, a great day both for the birds, and for the hardy birders who were out in Calgary yesterday. Once the numbers are tallied up and made public in the New Year, they’ll be posted here, though I suspect we’ve got a banner year for finches with the huge number of Grosbeaks, Redpolls and Crossbills seen in the last few months.

3 thoughts on “Christmas Bird Count in the Weaselhead”