Spring migration in Texas is world-famous among birders. Millions of  neotropical birds crossing the Gulf of Mexico heading north to their breeding grounds land at various spots along the Texas coast, exhausted from their non-stop trip across the gulf. When the weather is right, a fall-out can occur, in which many different species of migrants all drop into the trees of the first bit of land they see after the trans-gulf flight. This trip with the Houston Audubon down to the coast was supposed to witness one of these fall-outs. Except the birds never came.

When we arrived at the tiny but well-known Quintana Neotropical Bird Sanctuary, the treetops (which should have been swarming with warblers, orioles, buntings, flycatchers and tanagers) were silent. Completely silent. We soon discovered that the strong south wind was blowing the migrants right on by. You see, with a powerful wind at their backs, these birds can conserve energy and travel faster; so why stop? Realizing that we weren’t going to see much we started to leave, seeing both Brown-headed Cowbirds and Bronzed Cowbirds (neither is a migrant) on the way out. 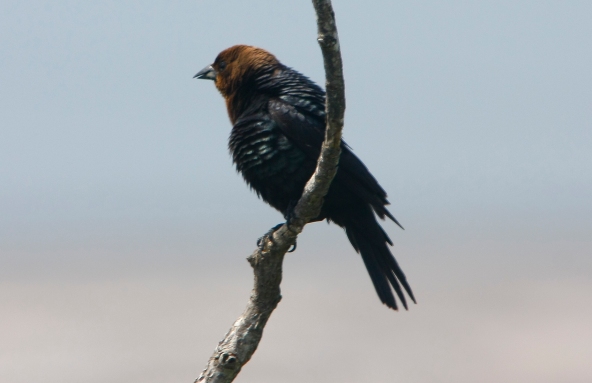 Just as we were exiting, things started to pick up a little and we saw an Eastern Kingbird, 2 female Orchard Orioles and a very brief glimpse of a male Rose-breasted Grosbeak, meaning that things weren’t too bad.

From there, we headed down to the beach and jetty, where we were happy to see all 8 species of terns commonly seen on the upper Texas coast. As our group toured the surrounding beach, we observed many different species of shorebirds including pretty Black-necked Stilt, many Sanderlings, striking Ruddy Turnstones in breeding plumage and intriguing Dunlin. We also were given an opportunity to view Wilson’s and Semipalmated Plover and tried our hand at the tricky identification of Western And White-rumped Sandpipers. All of these were just out of camera range but were beautiful up-close in our spotting scopes.

After gobbling down a quick lunch, our Houston Audubon group decided to explore the nearby Brazoria National Wildlife Refuge to see what else we could see. Brazoria, a refuge of grasslands and salt marshes quickly yielded up a lifer for me, a Least Bittern, which flushed from some reeds. We also saw Snowy Egret, White Ibis, Black-necked Stilt and good views of Sora (though the same cannot be said for the photos!) 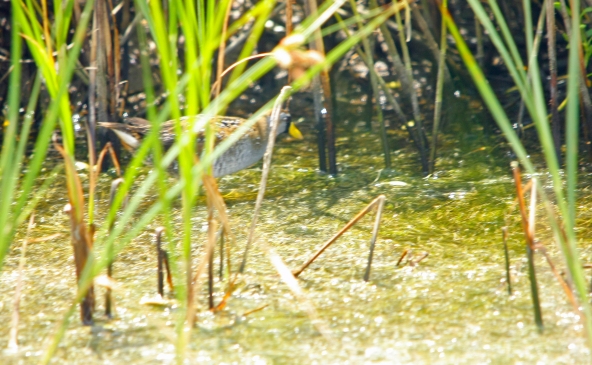 A very poor shot of the Sora

As our group drove the auto-tour loop, we saw some more great birds such as Dickcissel. One car had 3 handsome male Bobolinks singing. We even managed to spot a female Magnificent Frigatebird, which is always a highlight.

We finished our trip with about 80 species and though the songbird migration was definitely a low, the shorebirds and the activity at Brazoria were definitely highs and the trip was well worth it.