I’ve mentioned time and time again how much I love visiting the Weaselhead Natural Area in Calgary, even though until last year, I had never truly appreciated just how extensive the area is, and the history behind it. After counting birds there with Gus in the Fall Birding Course, with Rob Worona on the Christmas Bird Count, and then numerous times during the Winter and Spring birding course, followed up by not only a whirlwind tour during the Victoria Day Big Day, and then the May Species Count, one would think that I’d be a bit tired of it. Wrong.

We spent the morning of Sunday, June 10th in the Weaselhead once again, this time with a few target species in mind, but also visiting some areas that we didn’t spend a lot of time on during the May Species Count, and also letting the folks who weren’t able to commit to the many hours that morning for whatever reason get a good opportunity to see one of the few places in Calgary that one can see both the Rufous and Calliope Hummingbirds. On top of that, we got some bonus extra good looks of a few harder species to get close to, like the ever elusive Sora, and the Eastern Phoebe who are generally quite reluctant to allow close, clear views. Add to that this very brave Tennessee Warbler singing away on the main pathway through the park, and the spiralling, haunting song of the Swainson’s Thrushes calling from the south slope of the Elbow Valley, it made for a great day overall. We even got a few bonus birds throughout the day as well!

As we descended the slope into river valley, we had our goals well in mind. Hummingbirds, hummingbirds, hummingbirds. Whatever else we would see that day was superfluous, but since the males would be leaving the area soon, they were indeed our main objective. Down the hill and across the bridge, we were stopped for a few moments in awe of the Cliff Swallows under the pedestrian bridge, many still collecting mud for their nests, many others flying about catching insects for themselves or their young. Around the corner we paused to check for the Eastern Phoebes, and we saw not one, but both the male and female about, both gathering food. This one stopped to inspect us from only a few feet away for a good minute before finally retreating under the bridge. 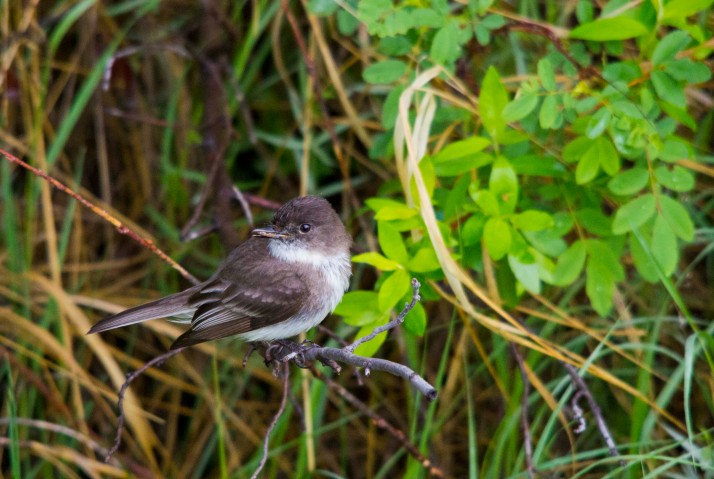 Our first bonus bird of the day, and one of the most stunning ones to see any time of year, was this Pileated Woodpecker, who had left quite a bit of evidence of its presence for the other groups that week, but was drumming away on this trunk in its search for its next meal.

A few hundred meters more brought us to our first hummingbird location. After scouting around for about five minutes or so, our search paid off as this male Calliope Hummingbird flew in to check us out. First keeping his distance, then coming in closer, and closer, and at one point buzzed within a foot of my head. 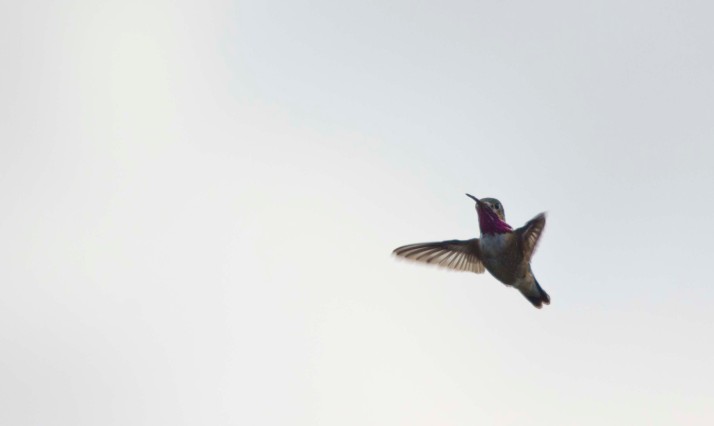 The whole experience was absolutely incredible, and I hope to see these hummingbirds again very soon!

From here, we headed west and south to the two beaver ponds at the south edge of the Weaselhead,  and upon reaching the ponds, heard the call of the Sora in the western pond. A few of us took up positions in the underbrush on the edge of the pond, and I pulled out my phone to play a Sora call. The calls were answered, first about 50 feet away, then 40, then 30, and then almost immediately the birds popped into view, not one, but two of them coming right toward us! The Sora in the photo below was just beyond the 8′ minimum autofocus distance, but at one point it was right at my feet.

As we walked up the path behind the pond in search for grosbeaks, thrushes, and any other bird we could find, we were treated to this Common Raven being harassed by a Red-winged Blackbird for what seemed like forever.

Next on our list: the Rufous Hummingbirds nesting in the spruce trees on the north slope of the Elbow Valley. It’s a long trek through the Weaselhead from south to north, and we had a few bonuses along the way. Most impressive was this Tennessee Warbler, very likely on his nesting territory, who came out to challenge us.

Back across the bridge, through the brush, and over the storm-water outflow drain and all of a sudden the buzzing and trilling of this Rufous Hummingbird was all around us. It displayed more than a few times by flying up high, then diving down to within a foot of the ground or bushes it was flying over, then back up to a perch before repeating the process. Unfortunately, with all the brush in the way and the bad light, few of my photos turned out at all, with this being the best of a bad few. 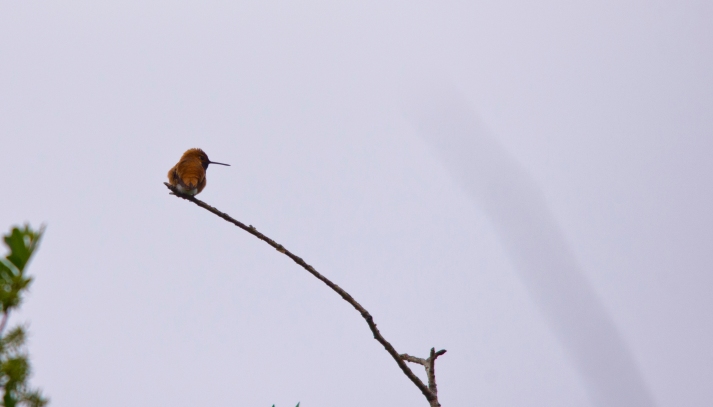 On the way back out of the Weaselhead, we decided to take a shot at finding the Brown Thrasher that Bob and I had seen a few weeks prior. On the hillside from the north parking lot, about mid-way down, there’s a grove that is known for being one of the few places that Spotted Towhees have been seen breeding in Calgary. Across from that is a small clearing that, for the last dozen or more years, some locals have kept well stocked with food for the birds of the Weaselhead, and all year long is a great place to see some of the rarer ones feeding. No birds were at the spot that day, but this little Least Chipmunk was nibbling on some sunflower seeds.

Along the northern bank of the Glenmore Reservoir, below North Glenmore Park, a Brown Thrasher (or a few Brown Thrashers) have been seen regularly, and Bob and I had found it two weeks before. Unfortunately, the only close relative of the Brown Thrasher that we found were a couple of Gray Catbirds… but what we didn’t expect to see were not one, but three Spotted Towhees flying back and forth along the lower path. Calling out with their harsh squeaky and annoyed call while foraging for food and staying out of sight. Despite their best efforts though, I did manage a few quick shots!

Once again, a great day out with great people and amazing birds to see!

Have a wonderful week!

2 thoughts on “Weaselhead Redux – Hummingbirds, Warblers and Thrushes, oh my!”