Last Sunday was a great day to be out counting birds. The weather was pleasant for the most part, and the sun came out, allowing for a few good photographs. I was covering the Inglewood Golf Course, Inglewood Bird Sanctuary, Pearce Estate, and adjacent areas with Ian Neilson and Troy Bourque (both excellent photographers). At the end of the day I checked out the zoo grounds by myself – counting only wild birds.

We started the day walking the golf course and spent about two and a half hours checking the Bow River and looking for passerines. (We had permission from the club to be on their grounds for the count – you don’t need permission to walk the riverbank, but it is a very difficult walk in spots.) There were plenty of Canada Geese and Mallards on the river, plus a few Common Goldeneyes, but nothing else.

Mallards on the river.  Photo by Troy Bourque

On the golf course itself we did find one mixed flock of several Black-capped Chickadees, three White-breasted Nuthatches, a Golden-crowned Kinglet, and a Brown Creeper. A Rough-legged Hawk made a low flyover – the first RLHA I recall seeing in this part of the city. Across the river we spotted an adult Bald Eagle, which then flew over us, and was joined by its mate. The pair settled in the same tree on the golf course where they have nested for the past few years (they always overwinter and spend a lot of time near this tree). 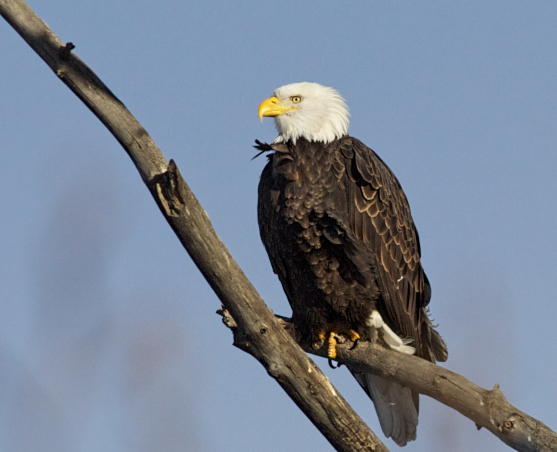 One of the adult eagles. Photo by Ian Neilson 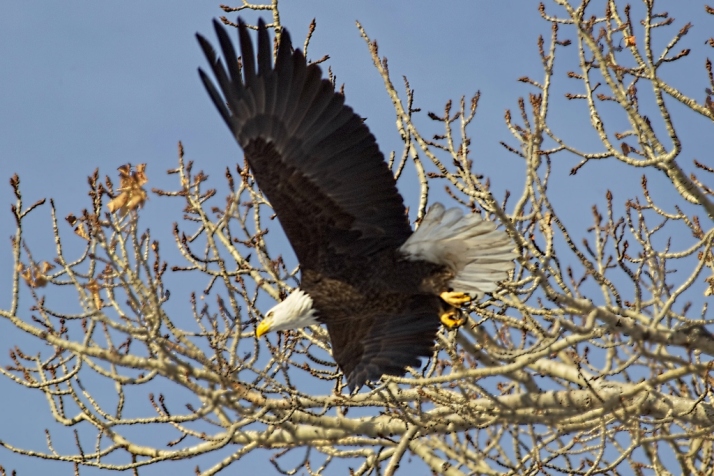 A little farther along we came upon a porcupine perched in a Water Birch at eye level, feeding. The porcupine didn’t mind us at all, so the photographers got some very close shots!

You don’t see these every day!  Photo by Ian Neilson

Don’t you just want to give him a big hug?  Photo by Troy Bourque 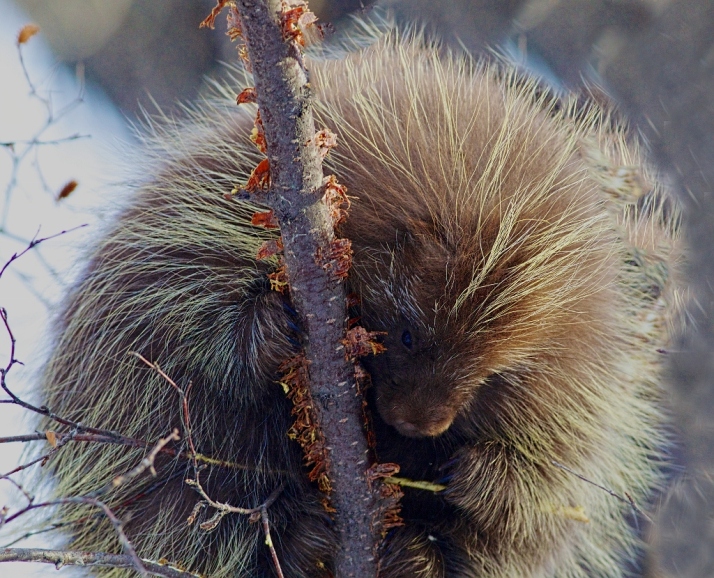 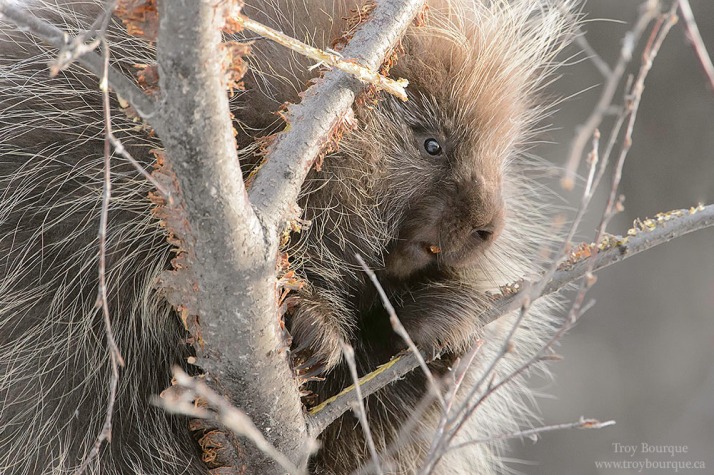 Our best mammal of the day.  Photo by Troy Bourque

It was some pretty tough walking through the snow and brush along the river, so we stopped for a rest and a hearty breakfast at the clubhouse. Then we were off to the Inglewood Bird Sanctuary across the river.  It was the middle of the day and pretty quiet. The chickadees were aggressively looking for handouts of seeds as usual, but we offered only to take their portraits.

Can you please hold still for 1/500 of a second?  Photo by Troy Bourque

We had an unusually low number of woodpeckers for the day – no Downies, only one Northern Flicker, and this bird.

After the sanctuary Ian had to depart, and Troy and I had a quick walk around Pearce Estates, which was even quieter than IBS. Then Troy had to leave, and I rushed over to cover the zoo before it got dark. The zoo grounds attract quite a few wild birds because there is a lot of food scattered around for the zoo animals, and lots of cover. It was a little strange to be rushing past Snow Leopards and Siberian Tigers with hardly a glance, but taking note of every House Sparrow. 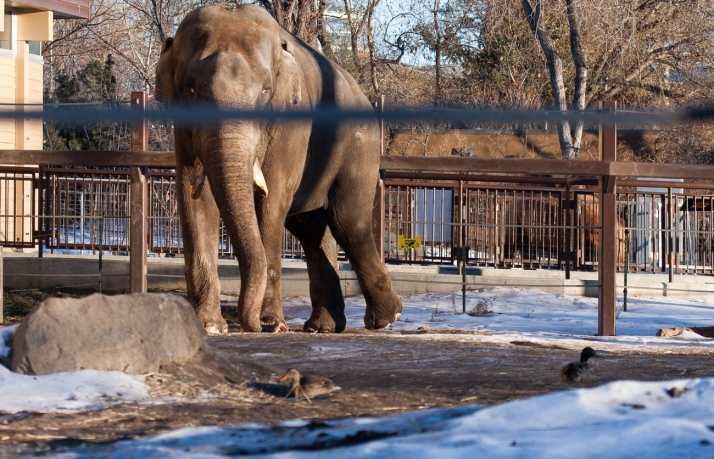 Over half of the European Starlings reported on the count were at the zoo – 56 out of 109, which is a fairly low number for starlings on the Calgary count. 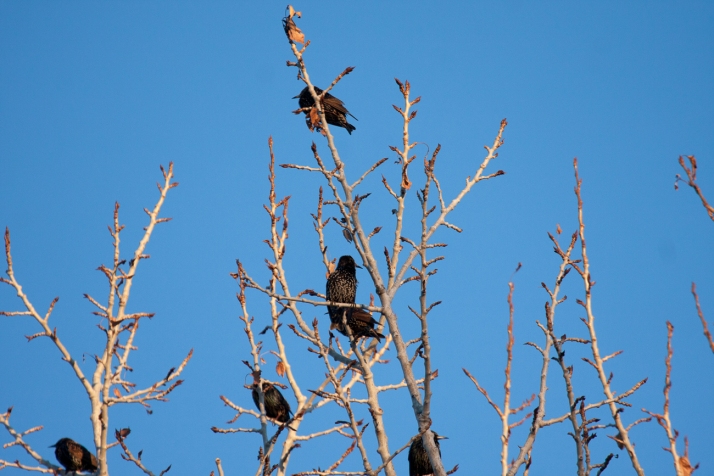 As the light started to fade, I heard a Golden-crowned Kinglet in a stand of Spruces, but couldn’t see the bird. I remembered something that Dan Arndt had told me – kinglets will respond strongly to a playback of their call even in winter – so I played the call on my smart phone app. Within a fraction of a second, three aggressive little kinglets materialized right in front of me, flitting about, vocalizing, and flaring their crown feathers. 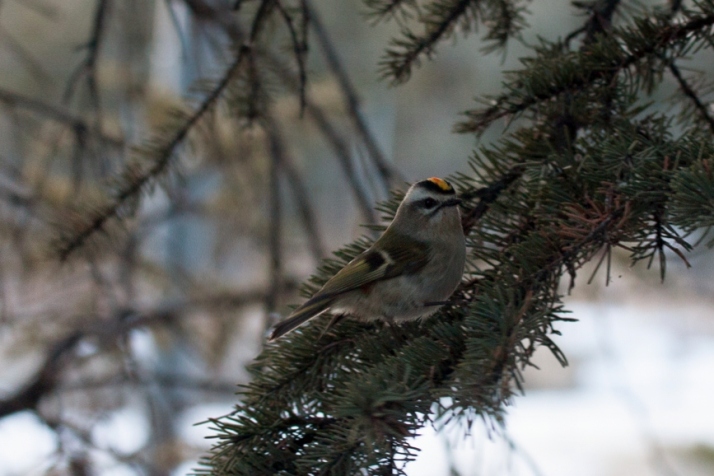 Here you can even see some of the red in the centre of the golden crown.  Photo by Bob Lefebvre

Then it was off to Arthur and Donna Wieckowski’s to compile the data and enjoy a great chili dinner. For a while it looked like we were going to have a low number of species for the count, but as the last few routes reported, we ended up with 65 species, exactly on our average for the last twenty years.

It was a very long day of birding but also very enjoyable, as always!

One thought on “Calgary Christmas Count in Inglewood”