It’s been a busy week, but now I finally have time to post about my Christmas Bird Count experience.  This year I was assigned to cover route E8 with Andrew Hart.  This area is a narrow strip along the eastern edge of the count circle, bordering 84 Street at the extreme east edge of the circle, and reaching to McKnight Boulevard in the NE and Shepard Road in the SE.  It is an area that requires a lot of driving, scanning the open areas for raptors.  We had high hopes of finding a Prairie Falcon, or perhaps even a Snowy Owl.

The only open water is in the northeast corner of Elliston Lake, but this can harbour a lot of waterfowl at times.  We went there twice, and unfortunately there were very few birds on the water.  We did find four Hooded Mergansers, which were only reported on one other route, and also the only Lesser Scaup of the day.  Other than that, there were only Mallards, Canada Geese, and Common Goldeneyes.

Although we failed to find a Snowy Owl or a Prairie Falcon, we did find three Rough-legged Hawks on the day, two of which I managed to photograph.  Here is one with typical markings. 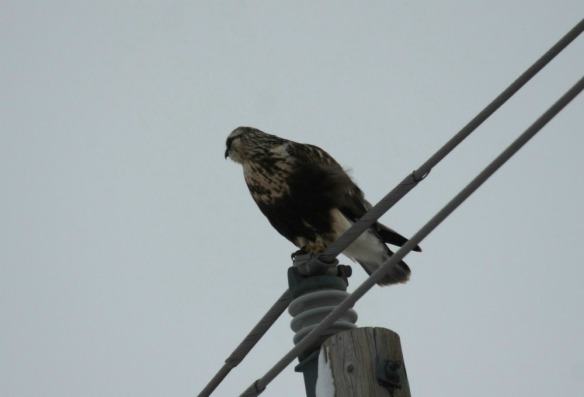 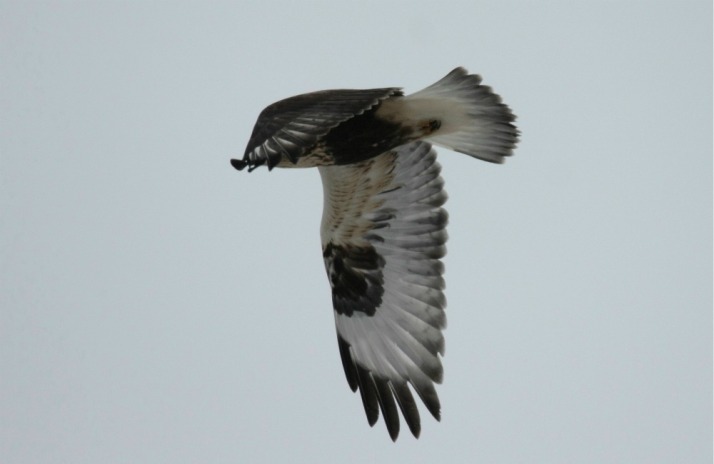 The other one, pictured perched below, had much darker underwings when it flew (which I failed to photograph).

The highlight as far as raptors went was a Northern Harrier, which was the only one reported on the count.  We didn’t get a picture, but after it flew, we saw something else in the shrubs along 50 Avenue and 68 Street SE, so we got out to investigate.  We flushed ten Ring-necked Pheasants out of the ditch, 7 males and 3 females or immatures.  Then we noticed that there were flocks of small birds all along the shrubs there, which proved to be upwards of 200 Common Redpolls (we tried to find a Hoary Redpoll among them, but no luck).

When we were checking out the redpolls, one bird stood out as much larger than the rest.  It was clearly a sparrow of some kind, but with the sun behind it we couldn’t initially see the colours or markings very well, and we weren’t sure what it was.  We lost track of it for a while, and I went around to the other side of the bushes.  We found three American Tree Sparrows among the redpolls, and although that wasn’t what our mystery sparrow was, they were good birds for the count, since only six were reported altogether, an unusually low number.

Finally the large sparrow reappeared, and with sun behind me I could see it well enough to see that it was a first-year Harris’s Sparrow.  These aren’t common here at any time, and only two were seen on count day.

Also nearby, on 51 Avenue near 68 Street, we saw a dozen Gray Partridges.  I got a poor photo of one.

We spent some time checking out the residential areas in the northeast, where we turned up a few new species.  The highlight was a pair of American Crows.  Terry Koryluk, who usually covers this route but was unable to this year, told us that there were two hanging out near Lester B. Pearson High School on 52 Street.  As soon as we pulled up there, the crows appeared and perched in a tree right in front of us.

We saw a lot of magpies, and the biggest concentration was at this deer carcass.

As for mammals, we saw a dozen (living) Mule Deer in all, and a few Eastern Gray Squirrels, but surprisingly, we saw no Coyotes.

Altogether we recorded 20 species of birds for the day, and although we missed a couple that we hoped to see, we saw a couple of others that were pleasant surprises.  The mild weather and the excellent wind-up at the Flynns’ made it another very enjoyable Christmas Bird Count.