Here are some recent photographs of birds from in and around Calgary, by David Lilly.  See more on the Canadian Bird Photographer website, and on David’s website. 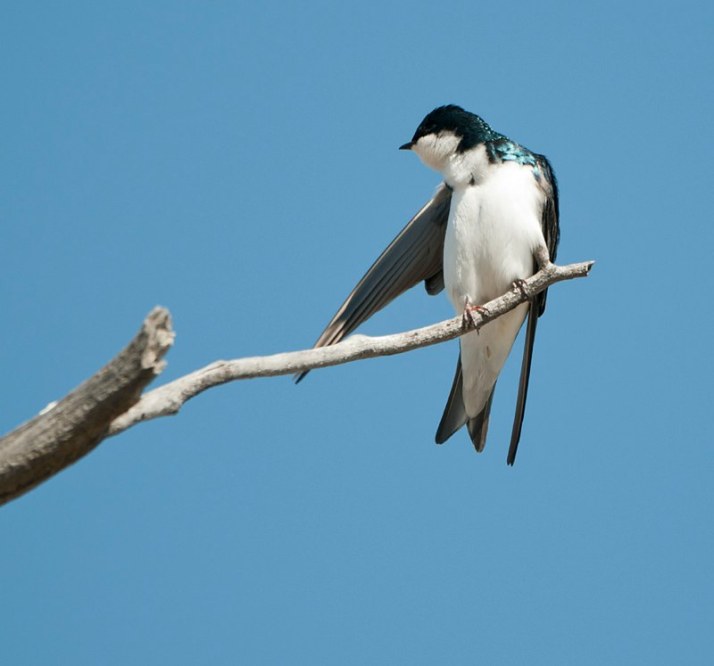 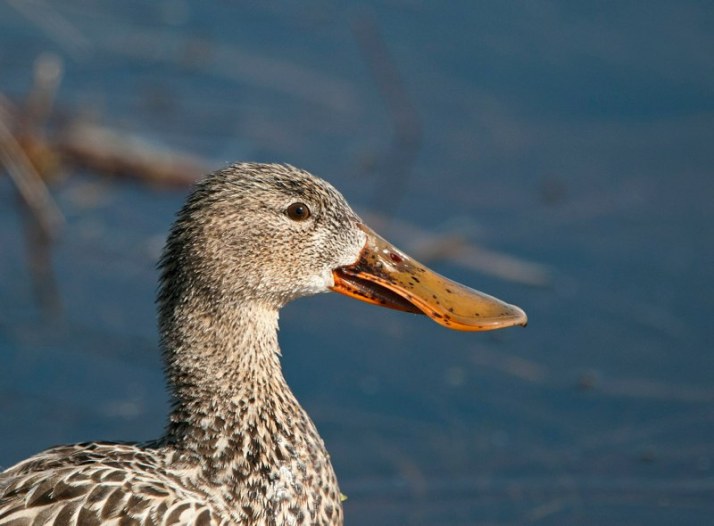 April marks the beginning of the spring session of the Friends of Fish Creek birding courses.  For this three-month session, Dan Arndt and I decided to lead a group at 7:30 a.m. on Sundays.  This might seem a little early to be going out in April, but by May and June the sun will be high before we get under way, and we hope to see and hear more birds than we would later in the day.

Dan is away for the first two weeks, so I will be reporting on what we saw, with photos provided by two of the course participants, Glenn Alexon and Paul Turbitt.

The first outing, on Easter Sunday, was in North Glenmore Park and the Weaselhead.  We spent about an hour checking the west end of Glenmore Reservoir first.  It is still almost completely frozen, with only a few small areas open in the west end, but there were some waterfowl there, notably some impressive Trumpeter Swans.

Trumpeter Swans landing on the water.  Photo by Glenn Alexon. 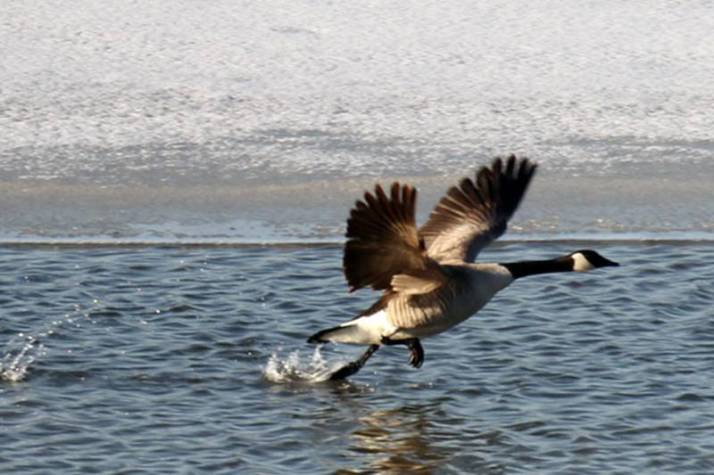 Then we headed down in to the Weaselhead.  A highlight there was a Townsend’s Solitaire singing from the top of a very tall spruce. 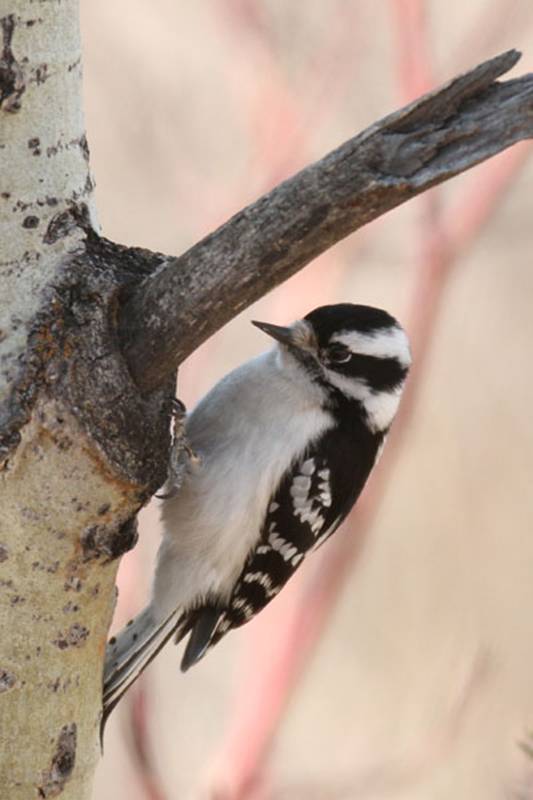 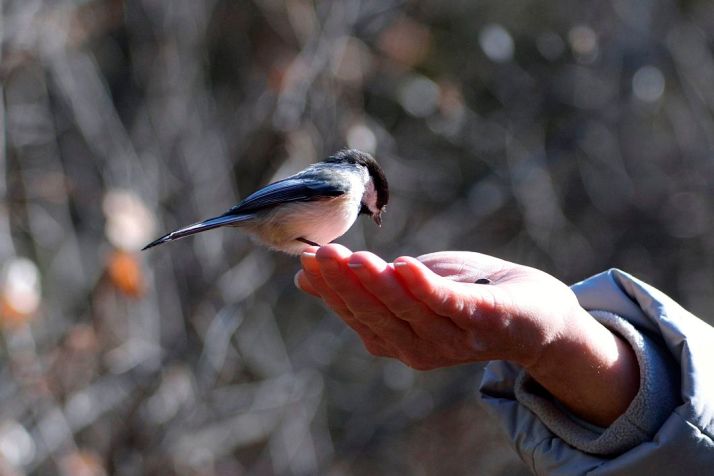 These chickadees expect to be fed.  Photo by Paul Turbitt. 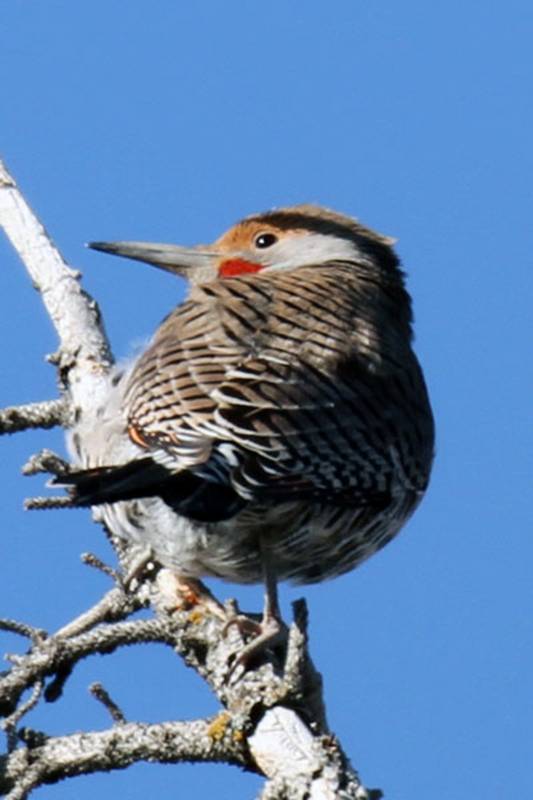 There were quite a few Red Squirrels around, and a couple of Least Chipmunks were also seen.

We had hoped to see Pine Grosbeaks and American Tree Sparrows at the feeders.  There were none around when we first went through, but on our last stop on the way back we found a pair of each. 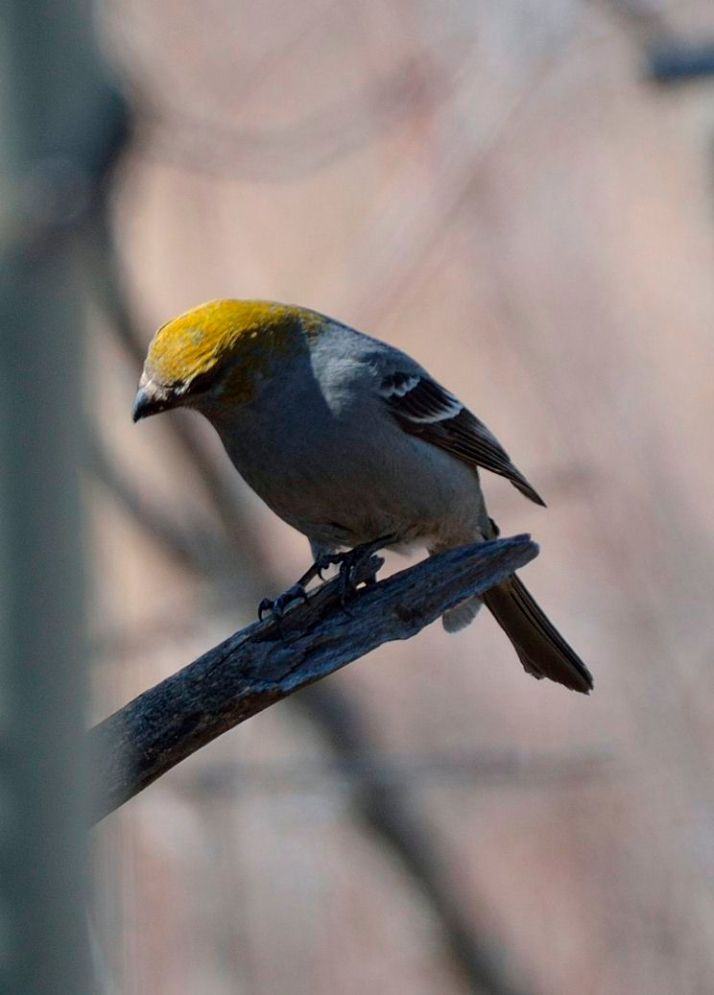 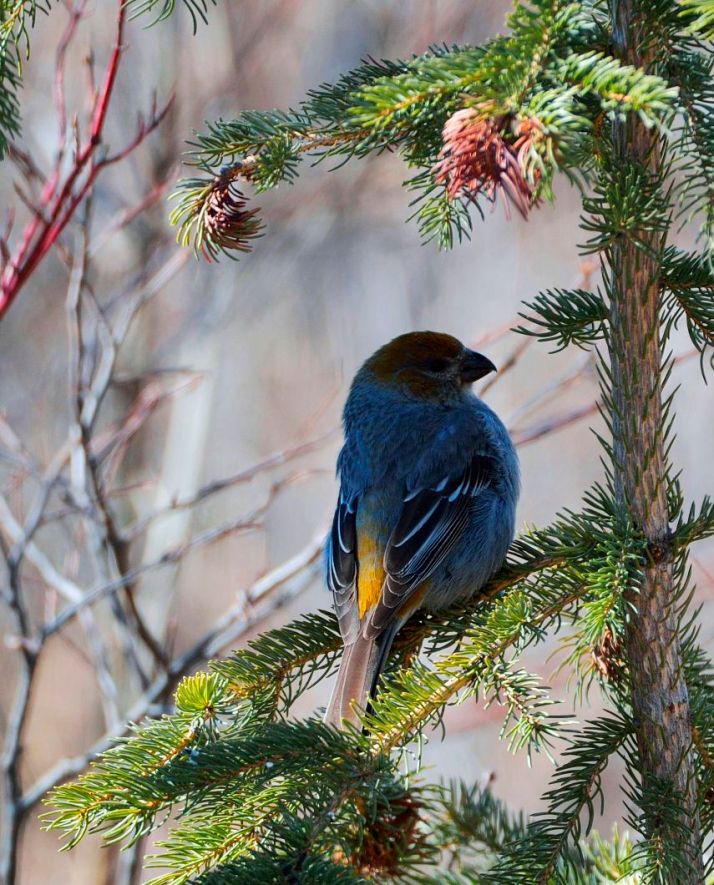 Back up by the parking lot, an early Richardson’s Ground Squirrel was the last species of the day. 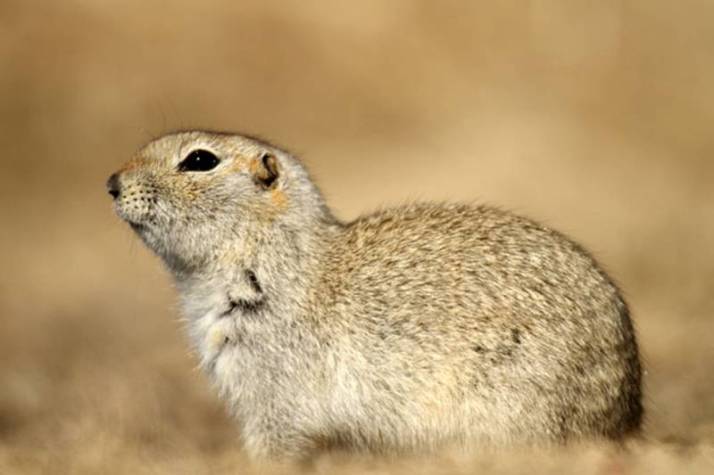 In all, we saw 28 bird species and four mammals.  The eight groups who went to this area during the first week of the course collectively saw 48 bird species and six mammal species.  The Weaselhead is a great place for spring birding!

To see more of Glenn Alexon’s photos, go to his Flickr page.

To read about one of the Saturday morning course outings, go to David Pugh’s blog.

Have you seen an unusual bird in Calgary? If it is on this Reportable_Birds (PDF), please report it to the Nature Calgary Rare Bird Alert line at 403 221-4519 and leave a message after the beep at the end of the recording. If you would like some help with species identification, us email us at birdscalgary@gmail.com.  To report injured wildlife call the Calgary Wildlife Rehabilitation Society at 403 239-2488, or the Alberta Institute for Wildlife Conservation at 403 946-2361.

The next scheduled update of the bird alert is on Thu Mar 15.

If you’ve taken any pictures of interesting birds in the Calgary region, you can share them with us by emailing birdscalgary@gmail.com and we may post them on the blog.

We received these amazing photos of Horned Larks from Joe Harley.  Horned larks have been returning to the area for the past few weeks and can be seen along rural roads.  They can be very hard to photograph but Joe got a few great shots.

We’d like to compliment the writers of the blog; we enjoy all the articles (and photos).  Thought I’d share the Lark family, photographed on Family day [February 20], not far from Kinbrook Marsh.  That’s all I was able to get of the Larks. We were in the midst of photographing Pronghorns when the Lark opportunity occurred.

Have you seen a flash of yellow in your yard lately?

The Wood Warbler family is famous for their diversity in plumage, song, feeding and breeding biology. All of them are small birds with long, thin bills used for snapping up insects and larvae. Perhaps one of the easiest to identify is the Yellow Warbler, which has more yellow in its plumage than any other member of the family.

In spring breeding season, males have rusty streaks on the breast and flanks, a bright yellow face with conspicuous black eyes, and yellow upperparts. They are known to build another nest on top of an old one when Brown Cowbird eggs appear in it, which can result in up to six different layers.

Yellow Warblers can be seen around the city from mid May to mid September. These birds are widespread in most shrubby and second-growth habitats in North America, where they can be seen quickly hopping from branch to branch. This bird was busily flitting from the saskatoons and lilac shrubs to the poplar trees in my yard. 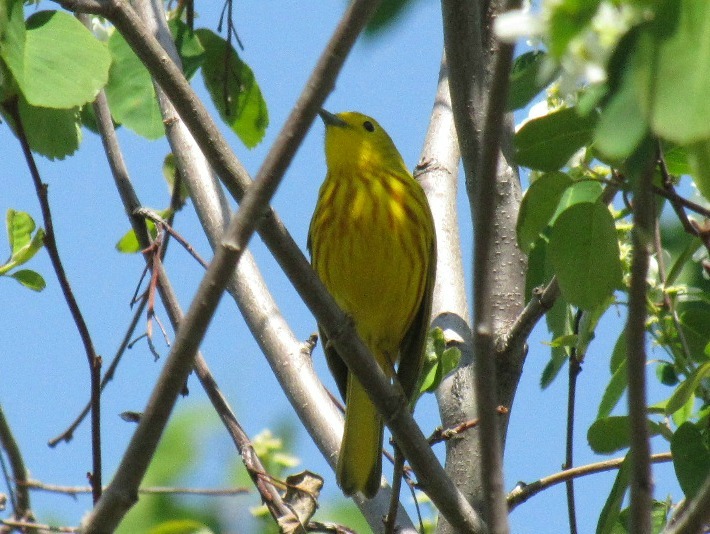 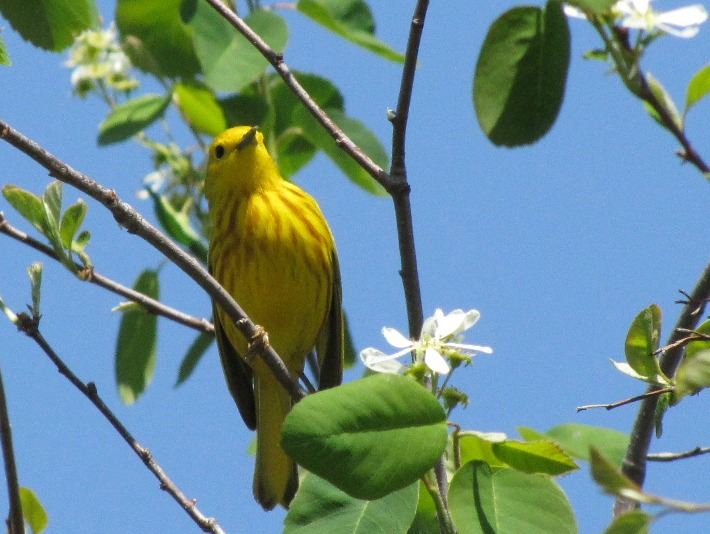 Update:  Results of the Big Day

The day started off well, but the weather gradually deteriorated, and by 4:30 in the afternoon, with cold driving rain, and after eleven hours of birding, we decided to stop.  The total for the group was 93 species.  I saw or heard 88 of them, so I’ll have to try another time to reach 100 species in a day.  Due to the weather we missed almost all shorebirds and warblers.

We went to the following locations:  Votier’s Flats, Bow Valley Ranch and Sikome, all in Fish Creek Park; Inglewood Bird Sanctuary; Elliston Park; Ponds one mile west of Shepard; Shepard; Shepard Slough (east of Shepard); a series of ponds south of highway 22X in the far SE; a pond just east of Spruce Meadows; the South shore of Glenmore Reservoir.  We didn’t go into the Weaselhead as planned.

How many species of birds do you think you could find within the city of Calgary in a single day?  The answer at this time of year is over 100.  This weekend there will be a great opportunity to see if you can do it.

Birders call this a “Big Day” – an attempt to identify as many species as possible in a twenty-four hour period.  This is often done as a competitive or fundraising activity, usually with teams of birders all trying to get the highest total.

For the past few years, Nature Calgary has offered a guided Big Day field trip every Victoria Day holiday.  It can be a long, hard day, especially in bad weather, but it is a great chance to see most of the bird species present in Calgary in the spring.  This year the trip is on Monday, May 23.  We will meet at Votier’s Flats in Fish Creek Park (at the south end of Elbow Drive SW) at 5:30 am.  From there, the leader, Tony Timmons, will guide us to several different habitats within the city over the course of the day.  Bring a  lunch, and be prepared for whatever weather we might get.

Last year, the group managed to find 111 species!  The highlight of the day was a Virginia Rail calling at a slough in SE Calgary.

In 2009, in very cold, wet conditions, the total was 108 species.  The birds are out there, so come out on Monday and help us find them!  If you need more information, call the leader, Tony Timmons, at 403-256-0754.  Like all Nature Calgary field trips, it is free and open to all members of the public.

At this time of year, the earlier you can get out birding the better.  The sun is up and the birds are singing before 6:00 am.  Sometimes it can be a little cold, but it’s a beautiful time of day to be out in the field.

Every Wednesday during the spring migration, Gus Yaki has been leading an early morning bird walk at the Inglewood Bird Sanctuary.   Last week I was able to join Gus and a small group of birders, and we found 42 species of birds.

This is a Nature Calgary field trip, so it is free and open to everyone.  The walk begins at 6:30 am at the parking lot and lasts for about two hours.  This coming Wednesday, May 25, will be the last of these early morning walks, so if you can manage it, it’s a good opportunity.

Here are some highlights of last weeks’ walk.

There is a partially albino female American Robin which has building a nest near the south end of the lagoon, opposite Walker House.  We were lucky enough to see it at close range, with its mate…

A female Belted Kingfisher was perched over the lagoon…

Several Yellow-rumped Warblers were seen.  This one is an Audubon subspecies… 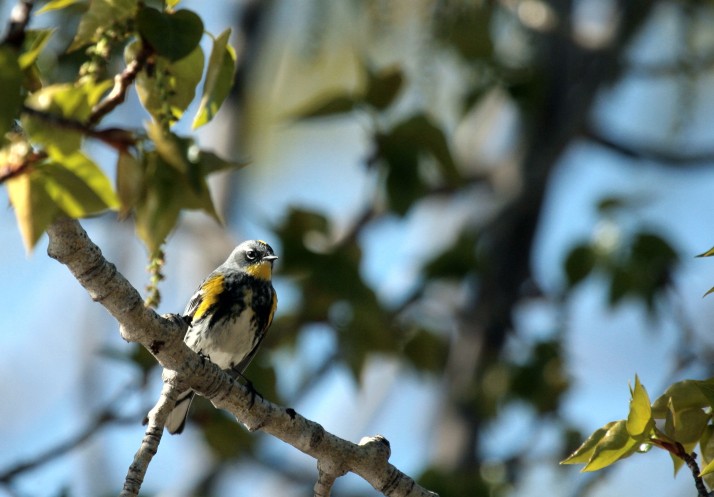 Two male Harlequin Ducks on a distant island in the river… 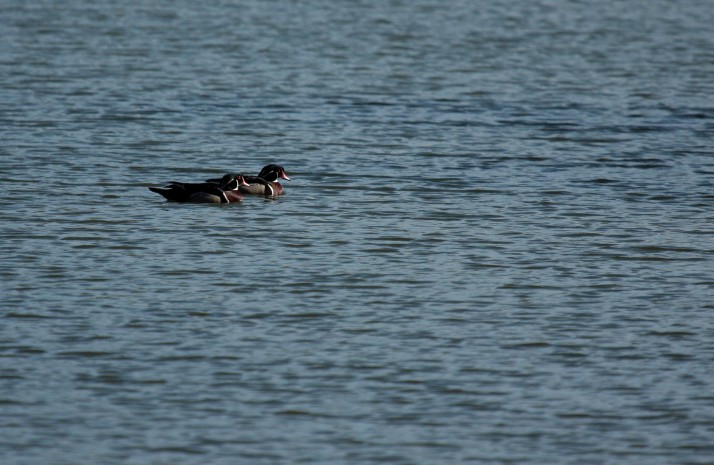 And lots of these guys looking for handouts… 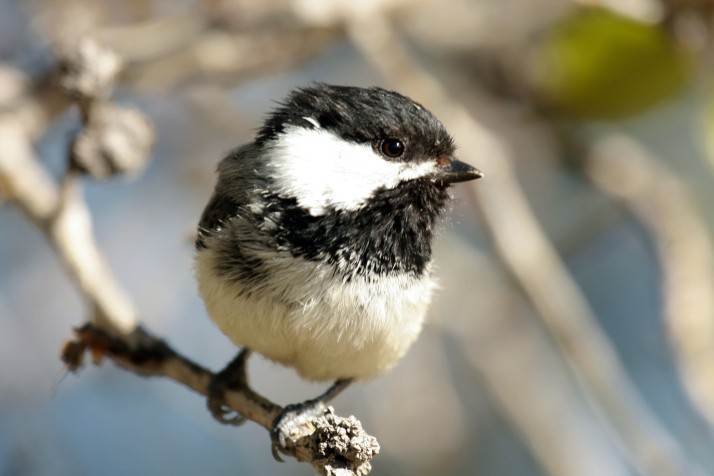 Afterwards I went over to the adjacent Inglewood Wildlands Park.  There were several Savannah Sparrows singing… 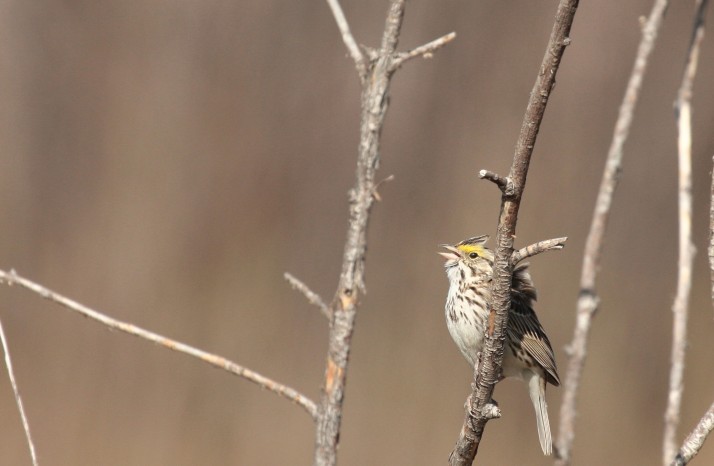 And hovering over the pond, a Say’s Phoebe…

You don’t see these flycatchers in the city too often, and I got a good look at it…